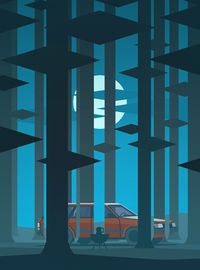 Act II of Kentucky Route Zero was released on May 31, 2013. It introduces Ezra to the main cast of characters. 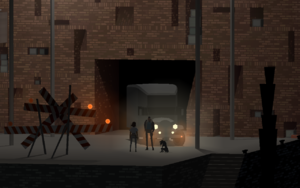 SHANNON: This is weird, but ... do you think we're inside or outside right now?
CONWAY: Inside. / Outside. / Both.

Act II opens with a prelude in which Lula Chamberlain, an installation artist whose work is featured in Limits & Demonstrations, receives a rejection letter from the Gaston Trust for Imagined Architecture. After reading the note, she sorts through a series of proposals for reclaiming spaces for purposes alternate to their current function, such as a proposal to reclaim a distillery as a graveyard. If the player met Carrington in Act I, he will interrupt Lula, and ask her about his proposal for a venue for his performance. Otherwise, her coworker Rick talks to her, asking about the proposals and an upcoming office party.

Thoroughly lost on the Zero, Conway and Shannon stop at six-story building known as the Bureau of Reclaimed Spaces. They speak to the receptionist, Mary Ann about finding 5 Dogwood Drive. Unable to assign them to any of the proper clerks for the process, she instead sets them up to the fifth floor to meet with Lula. On the way, they encounter a variety of hermit crabs, a floor full of bears, and an organist. 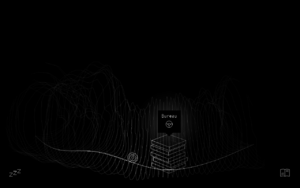 MARY ANN: Just get back on the Zero and drive until you hit the crystal. Then turn around. It'll make sense once you get on the road.

After failing to navigate the bureaucratic mess of junior clerks that Rick presents them with, the two finally meet with Lula. She tells them that she used to live on a Dogwood Drive, but that it cannot be the same one: due to computational "name collisions," the many streets named Dogwood Drive have all been renamed, such as to Pale Dogwood Drive, Large-leafed Dogwood Drive, or Himalayan Flowering Dogwood Drive. She ponders if her former lover Joseph sent them to her to get her attention, or if her former intern Weaver overestimated her capabilities. However, believing that one may still just be named Dogwood Drive, she suggests they search the log of road name changes on the fourth floor. After the two come up empty-handed, Lula concludes the records have not yet been transferred to the new building from the former site of the Bureau, the Saint Thomas Church. She also suggests Conway seek out Dr. Truman to help with his leg, giving them his address in a small neighborhood on the east edge of Bowling Green.

BRANDON: "Work is play for mortal stakes." That's the title of the evening's homily, in fact.

Mary Ann tells Conway and Shannon that the church is actually inside a self storage facility, and describes how to navigate there by following a series of ritualistic directions on the Zero. At the storage lot, the two talk to the janitor, Brandon. He says that he must start the night mass, but tells Shannon the records are in unit C315 and gives her his keys. Shannon leaves to look for the records while Conway rests his leg. Brandon presses play on an old tape player, and the two talk and listen to a prerecorded sermon on the virtue of hard work. Shannon returns with the file they were looking for. As they leave the building, Conway collapses from his injury, hallucinating about his accident at Elkhorn Mine. When he comes to, Shannon decides their first priority should be to find Dr. Truman.

They return to the Bureau only to find that Lula has disappeared in a hurry; however, before she left, she processed all the files needed to transfer Conway and Shannon back to the surface roads. They also encounter Carrington at the Bureau, and Conway is able to suggest either Elkhorn Mine, the self storage facility, or Equus Oils as the venue for where Carrington can host his performance. The two head out of the Zero, above ground, in search of Dr. Truman. 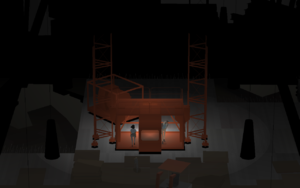 Following the directions given by Lula, they arrive at where his house should be, but find that all houses in the neighborhood have been torn down and replaced with the under-construction Museum of Dwellings. Here, they encounter residents of the museum's many residences and, while taking cover from the fierce storm outside, explore the displayed homes as narrated by the museum staff watching security footage in the future. The residents discuss the group's presence: Fred believed they were from the power company and stayed indoors, Hudson recounted a conversation with Shannon about his crackling radio, and Sadie describes how she talked with them on the porch. Exploring one house, they meet Flora, a young girl who tells them that Dr. Truman has since moved away. Flora also recounts Conway's story of exploring the cabin, in which he said he found an entrance into a hidden basement containing a pit with glowing moss, a garden, and a river. Conway states he lived in the cabin with one of his parents when he was young. 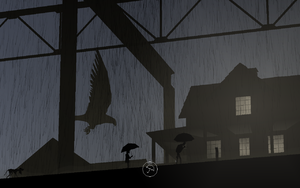 EZRA: Julian's my brother. He's a lot bigger and stronger, and he has more feathers than me, but he's still my brother.

After exploring a variety of other dwellings, including houses, trailers, birdcages, horse stables, and tents, and talking with their residents, Conway and Shannon take a construction lift to the roof where they meet Ezra. The young boy explains that he and his brother Julian fly many of the museum's homes, including Dr. Truman's, out to the forest at night because the forest is easier to sleep in, but that Dr. Truman asked not to be brought back. Ezra agrees to bring Shannon, Conway, and his dog to the doctor and calls Julian, a giant eagle who swoops down, snatches them off the roof, and flies them to the forest. In the air, the group can observe many situations and locations below, such as an all-night diner, the Márquez Farmhouse, Equus Oils, a wandering guitar player, and the bait shop. 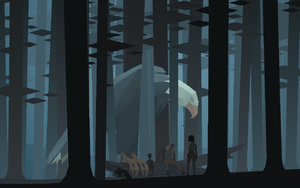 EZRA: You have a way of falling behind, don't you? Me, I'm always too far ahead. Maybe I should slow down a bit, like you. 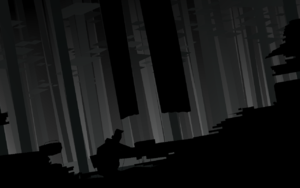 EZRA: They're singing about their home because they're lost right now. It's a scary song.
SHANNON: It's scary, but they can still sing about it.

The group lands in the forest. As, Conway, limping and assisted by Shannon, and the rest of the group walk through the illusory trees, stopping intermittently, Emily, Ben, and Bob can be seen playing "Long Journey Home" in the foreground. They arrive at Dr. Truman's house and while Ezra and Shannon watch TV, the doctor inspects Conway's leg and gives him a dose of an anesthetic called Neurypnol TM. Conway begins to succumb to the drug and falls into into a nebulous, drug-induced sleep, as his vision grows black and the walls of the house pull away to reveal the forest beyond. 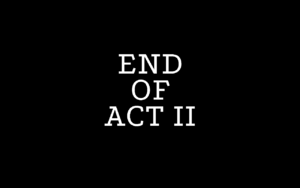 In the overworld (flying with Julian)[edit]