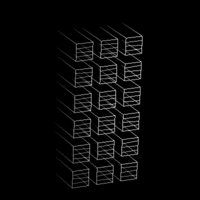 Random Access Self Storage is a stop along the Zero, located on Route 8192 next to the crystal.

Previously used to store paper records for the Bureau of Reclaimed Spaces, the facility still houses many of these files, having not yet been transferred. It serves as the temporary site for the Saint Thomas Church after the cathedral was reclaimed by the Bureau, although, due to the lack of space and presumably the poor atmosphere and ambience, the congregation stopped showing up.

In Act II, Shannon and Conway visit the facility and talk to Brandon, the janitor, about finding Bureau documents regarding 5 Dogwood Drive. While Shannon seeks out the records, Conway rests his leg and either listens to old recorded sermons or makes small talk with Brandon. As she returns, Conway blacks out and experiences a flashback to his accident in the Elkhorn Mine.

In Act III, the group may optionally return to the facility where they encounter Mary Ann oil painting. If the facility was previously suggested to Carrington as a venue for his upcoming play, he appears here and discusses the performance.