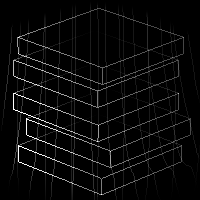 The crystal
Route 65 (counterclockwise)
The crystal

The Bureau of Reclaimed Spaces is an institution that assigns new uses to spaces deemed underused. Its offices are built into the side of a cathedral with architecture partially inspired by St. Bride's Church of East Kilbride. Its location between the Echo River and the main circuit of the Zero make it a hub of underground travel.

The lobby consists of a small dock with a reception desk and a waiting area. Niches in the walls contain clusters of television sets, each depicting different scenes. The Bureau of Secret Tourism's phone, answering machine, and brochures sit on the waiting area coffee table.

Hermit crabs congregate along the edges of the dock during Will's organ performance. Many have repurposed office supplies as shells.

The clerks' offices are a relatively average office space — desks, computers, stacks of paperwork. Lula Chamberlain, Rebecca Metzstein, Ed Böhm, and Ellen MacMillan can be found working at their desks while Rick idles beside the elevator.

The conference room has a projector screen and a table of employees that watch Conway and Shannon as they pass. There's also a water cooler, coffee, and food. In the back is a small kitchen.

On a ledge across from this floor, Will can be found grilling crab beside a large pipe organ. If the player watches him, he will begin playing "Bureau of Reclaimed Spaces", and lights throughout the building will dim.

Once the lights are out, the conference begins a slideshow of "obscure corners of nameless interiors, astronomical diagrams projecting the distances between celestial bodies, a painting by Giorgio de Chirico, a list of 'unpopular anagrams.'"

The third floor is inhabited by a sleuth of bears that may have previously lived near the town. They sit among stacks of buckets, watching Conway and Shannon as they pass.

The fourth floor is crammed with tall stacks of filing boxes containing records beginning with A, B, C, D, E, and F. All other records are stored in unit C315 of the Random Access Self Storage facility.

Greg can be found working on the top floor. Beethoven's Symphony No. 3 plays on a skipping record in the corner.