From Highway 0, the Kentucky Route Zero wiki
(Redirected from Shannon)
Jump to navigation Jump to search 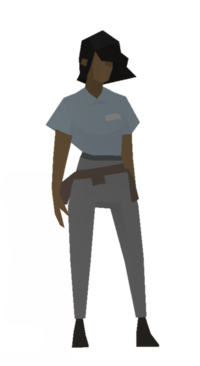 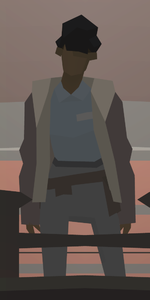 Shannon Márquez is a TV repairwoman and the cousin of Weaver Márquez. In Act I, she joins Conway on his search for Dogwood Drive.

Shannon was born to a family of immigrants. She grew up living with her mother, father, uncle, aunt Remedios, and cousin Weaver. Their financial and legal situation was often precarious, and she grew up without health insurance or regular doctors. Shannon's parents worked as miners at Elkhorn and drowned when it flooded, presumably leaving Shannon in the care of her aunt and uncle for her later high school years.

As an adult, she began living and working out of the back room of the bait shop on the corner of Wax and Peonia Road, using it as a workshop for TV repairs. However, as flat-screen TVs began replacing CRT TVs, she was unable to keep up with the bills. She is evicted during Act III.

Depending on the players' choices, she may have an ex named Alejandra or Mark who she still talks to on occasion.

Shannon is named after the mathematician Claude Shannon, the "father of information theory," and the famous Colombian magical realist author Gabriel García Márquez.