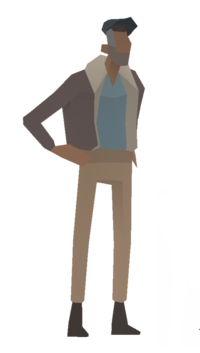 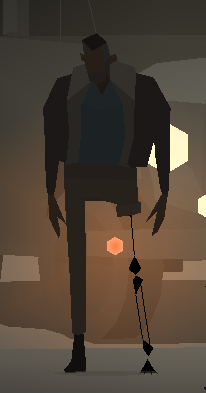 JUNEBUG: Good to stretch a bit. How's your leg?
CONWAY: Not my leg.

Conway is an older man who works as an antique deliveryman for Lysette's Antiques, and previously as a roofer for Ira. He has a dog. Throughout the main story, he works to make his final delivery to 5 Dogwood Drive, discovering and traveling the Zero in the process. He is the character around which events in Kentucky Route Zero focus, and is the main character controlled by players at the start of the game.

Conway has struggled with alcoholism throughout his life and is implied to have been a delinquent from a relatively young age, ditching school with Lysette in favor of bars. He worked odd jobs for some time afterward until he was hired by a small roof repair company run by Lysette's husband, Ira. He was fired and re-hired multiple times due to his alcoholism and unreliability, and slept in their barn. Conway feels responsible for the death of Charlie, Ira and Lysette's son who slipped off a roof while filling in for Conway, who at the time was too drunk to perform the job. At some point, he gave up drinking. After Ira's death, Conway adopted Ira's dog and, using Ira's old truck, became a deliveryman for Lysette's Antiques.

In the Museum of Dwellings found in Act II, Conway encounters an empty cabin which he identifies as his childhood home.

Conway has a brother, but says he doesn't know how to get ahold of him these days.

Conway is likely named after John Conway, a famous mathematician known for Conway's Game of Life.