Death Of The Hired Man 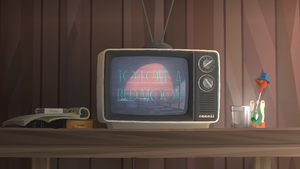 Harry's TV at The Lower Depths

Death Of The Hired Man is the fifth and final Kentucky Route Zero interlude, released on January 28, 2020 alongside Act V and the game's TV Edition. Its title comes from the poem "The Death of the Hired Man" by Robert Frost.

The title is also the name of a play directed by James B. Carrington, an adaptation of the Frost poem, for which he seeks a venue throughout the course of the main game.

With no audience, actors, or crew to perform his play, Carrington sits in The Lower Depths with Harry Esperanza while lamenting the failure of his production. Emily sits and watches TV while the two talk. The events of the interlude mirror those described in Frost's poem of the same name, with certain lines of dialogue borrowed directly from the poem. Carrington and Harry (who mirror Frost's characters of Warren and Mary) discuss Lula's sudden move to Mexico, Brandon (who mirrors the character of Silas), and what the concept of having a place to call home means. Despite the failure of his performance, Carrington, albeit unknowingly, finds himself within a version of the story nonetheless.