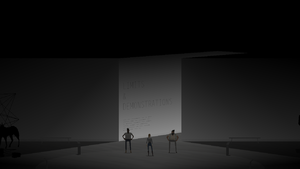 Emily, Ben, and Bob in front of the exhibition text.

Limits & Demonstrations is the first Kentucky Route Zero interlude, released on February 8, 2013 between Acts I and II. It features Emily, Ben, and Bob visiting an art museum as they walk around a retrospective exhibition of Lula Chamberlain's work. The player, acting as the three characters, may navigate the exhibition space while discussing and interacting with the works on display.

The game originally began as a "graphics card test" demo, for players to see whether their computer was capable of running Kentucky Route Zero. Cardboard Computer stated in a February 2013 newsletter that they aimed to "[present] various graphics card features that the game requires as a virtual art gallery."[1]

Wall text near the entrance of the room informs viewers that this is the first major exhibit consisting of works by artist Lula Chamberlain in more than twenty years.

LIMITS and DEMONSTRATIONS
A Lula Chamberlain Retrospective.
Marking the first major public showcase of her work in over twenty years, this retrospective exhibition of work by pioneering installation artist Lula Chamberlain comprises a diagonal slice through time, place, and form. The pieces on display here were individually debuted over a period of thirty-five years, designed in Chamberlain's various homes and studios between her beloved Mexico City and her native Elizabethtown. They represent a range of scale and impact from the intimate warmth of Vertex Texture Fetch to the infamous Visage, the latter of which requires a vertical clearance of over thirty feet. Yet these works share a confounding legacy: in each of their debut exhibitions, they were nearly impossible to install. Galleries and museums balked at the scale, power requirements, and highly-skilled labor involved in maintaining these works for display. Some of their debuts collapsed under the weight of logistics, only to be successfully executed much later. And so, just as they describe the outer limits of Chamberlain's range as an installation artist, the geographical edges and vertices of her itinerant home life, and the beginning and end of her distinguished career, the works on display here also trace the extremes of our capabilities and the frontiers of our patience as both viewers and exhibitors. Are we capable of viewing these works as they were meant to be viewed? Do we even want to be?

In clockwise order, the works on display are as follows:

Little Berlin – a gallery, artist collective, and exhibition space in Philadelphia, Pennsylvania – hosted an art show featuring recreations of the in-game artworks as part of a real-life exhibition titled "Limits and Demonstrations: A Lula Chamberlain Retrospective". The exhibition opened on October 4, 2013 and was curated by Lee Tusman, with future selected showings on October 10 and 17. The October 17 date featured a special reception and talk with Cardboard Computer via Google Hangouts (also streamed online), in collaboration with the Grassroots Game Conference.[2]

A showing scheduled for October 24 was cancelled after the gallery's host building was temporarily closed after receiving building code violations.[3]