Donald is a friend of Joseph and Lula from their college days. Together with them, he created XANADU, a project which fell into eventual ruin. In college, he was jealous of Lula's relationship with Joseph. 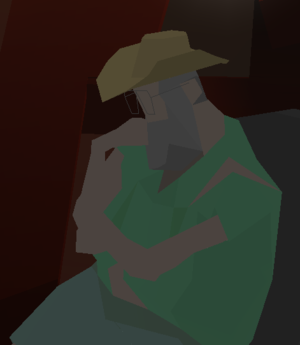 From: donald@hotmk.mail
Subject: fragments dim of lovely forms
Message: Joseph, I know it's been a while, and I know you're still sore. But there's a whole world in here, and we need your help to unmask it . . . I miss those days in the lab, with you and our dear Lula. Maybe you've found your own "Xanadu." Well, so have I!

Donald dedicated his life to developing XANADU. After initially running out of funds, he moved the project to Bedquilt Cave along with Joseph and Lula. The three became lost in the sprawling tunnels and, after encountering the Hard Times boys – the "Strangers" – and their skeletal apparitions, Joseph and Lula fled, leaving Donald alone. He moved to a large cavern – the Hall of the Mountain King – off the Zero to continue work on the project. He posted advertisements on the University message boards and hired lab assistants to help him with the project, and published articles such as Literary Multitudes: Hypertextual Narrative as Poststructural Witness. He discovered black mold growing on XANADU's circuitboards, giving it an unpredictable sentience, but the Hard Times workers quickly came to scrape it away. Eventually, one of his assistants, Weaver, went to speak to the workers; she did not return, but neither did they. XANADU was left to disintegrate under layers of neglect and age.

In meeting with Conway, Shannon, Ezra, Junebug, and Johnny in Act III, he quotes a modified version of Samuel Taylor Coleridge's poem Kubla Khan, itself inspired by Xanadu (Shangdu), China, the summer capital of the Mongol ruler Kublai Khan.