Difference between revisions of "Ezra" 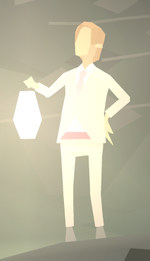 EZRA: I bet you were wild when you were younger. When I'm old like you, I'll still be wild.

Ezra is an imaginative young boy and brother to Julian, a giant eagle. In Act II, he joins Conway and Shannon in hopes of finding his family.

Ezra's family used to live in a large house, but were eventually evicted and left homeless. Finding himself unable to sleep at the bus shelter they were staying at, Ezra took off to fly around with Julian every night. One morning, they returned to find their family was gone, but all their belongings still there.

Afterward, Ezra and Julian lived both in a nearby forest and at the Museum of Dwellings for some time, where he befriended Flora, a girl his age. Because many of the residents were uncomfortable sleeping in the under-construction museum (due to its lack of roof), Ezra and Julian decided to fly the homes out to the forest at night and bring them back in the morning. While Ezra set off with Conway and Shannon, Julian continued to fly the houses back and forth.

Ezra loves to explore and and think up dramatic stories, and claims to be an avid reader. He enjoys being alone, and often plays in the woods behind his house. He loves playing games of all sorts, and adds an imaginative viewpoint to many situations.

Ezra is possibly named after Ezra Pound, an Imagist poet. Previous work by Cardboard Computer and Jake Elliott, namely A House in California, was in part inspired by Imagist poetry.

Per the V&A's Videogames: Design/Play/Disrupt exhibition, Ezra was originally imagined to be eight years old.