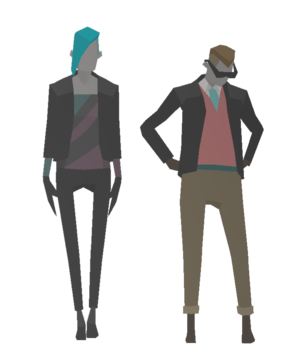 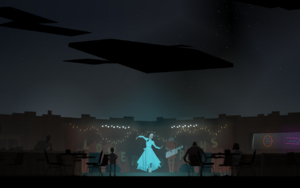 JUNEBUG: Johnny found some gear — an old tape player. We hid away in an underwater cave and listened to it over and over, and we knew we weren't miners ...

Junebug and Johnny are a pair of mechanical musicians, introduced to the cast in Act III when they encounter Conway, Shannon, and Ezra stranded on the highway. The two fix Conway's truck, and travel onward to perform "Too Late to Love You," a song originally sung by Lysette, at the Lower Depths tavern. After their performance, Junebug and Johnny decide to accompany Conway, Shannon and Ezra on their travels.

A wrongle of Junebug and Johnny is viewable at http://kentuckyroutezero.com/junebug.wrongle.

Junebug and Johnny were originally part of a robotic crew manufactured by the Consolidated Power Company to drain Elkhorn Mine after its catastrophic flood. Junebug describes her original build as "about a half-foot shorter, and all gray. No eyes." While in the mine, Johnny discovered one of the archivists' tape decks. Listening to the miner's songs, he and Junebug realized they could be something more, leading them to run away and become musicians.

Junebug has a custom motorcycle, with a sidecar for Johnny, that she built and maintains. Depending on the player's choice, it may be named the Weird Vector, the Sloth-on-wheels, or the Vicious Cycle.

Johnny once found a pet frog (or toad, depending on who players ask) in a shoebox on a playground and kept it for about six months. According to Will, they are frequent travelers on the Echo River. 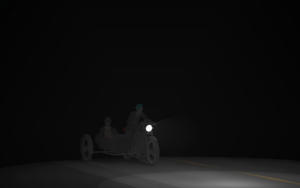 JUNEBUG: We slipped out onto the road, just these two featureless shadows, and ever since that night we've been detailing. Coloring in. Specifying. I feel more like myself every day.

Ever since running away, Junebug and Johnny have been adjusting and detailing themselves to reflect their identities and to appear "specific." They both frequently alter their physical appearances between scenes, changing outfits and hair colors. However, Junebug consistently boasts a half-shaved hairstyle while Johnny wears dark sunglasses and a typically-orange flattop hairstyle.

Junebug is the de facto leader of the duo, and is more cynical, sassy, and solitary than Johnny. She has a biting sense of black humor – often dark to the point where her jokes are more tragic than funny – with which she habitually teases and flirts with Johnny, who she calls her "cricket." She tends to keep everyone else at an arm's length.

Although she buries it in bitterness and denial, Junebug occasionally lets slip glimpses of an identity crisis between person and machine. She seems concerned about genuineness, and tends to dismiss personal problems. At one point, Junebug may explain that she likes looking at porcelain figurines because of how peculiarly non-genuine she finds them – identical figures with their jobs "painted on" – their definition and value being told through little more than a paint job.

Johnny is the more passive of the duo, and often seems distant from the events unfolding around him. He occasionally finds himself compared to a dog, and often stays behind or at the sidelines with Conway's old hound. Despite his assertion that Junebug is the artist – and that he is "only an entertainer" – Johnny appears to be highly creative and poetic. He spends much of his time thinking, daydreaming, composing music, and being distracted by the world around him. He enjoys teasing Junebug, often with her same tragic sense of black humor, and refers to her as "ma'am."

Johnny has a passion for sound and a particular affinity for animals; the two may explain that he enjoys the digital cacophony of the arcade or the animals at the petting zoo. There are a number of stops along the Echo River at which Johnny tries (often unsuccessfully) to record various sounds with his tape recorder. 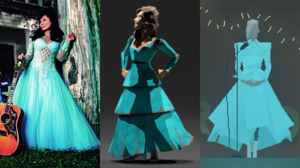 The character of Junebug was originally based on Loretta Lynn, a country singer-songwriter known for her song "Coal Miner's Daughter." Although her final design contains significant changes, Junebug's extravagant blue gown remains a reference to Lynn. Jake has also stated her original character took inspiration from June Carter Cash.