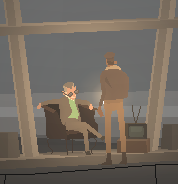 Joseph Wheattree is the owner of Equus Oils and a friend of Lula and Donald from university. Joseph has gray hair, is blind, and wears dark glasses. Joseph created the XANADU software with Lula and Donald, and also adapted two of Lem Doolittle's plays for performance as The Entertainment.

Joseph created the game "If I Had My Way, I’d Tear the Building Down" in 1985, shown in the (text) museum near the Márquez Farmhouse. In the Rust Archives, two sets of samples are under Joseph's name: "Mexico City, VAM Station Wagon, 1974" and "Elizabethtown, Kinetic Sculpture, 1968."

Joseph has a niece who works at a hospital. He used to have a cat, which passed away at some point after he was in university.

Joseph is named after the computer scientist Joseph Weizenbaum (with "Weizenbaum" meaning "wheat tree" in German), who created ELIZA (which was named after Pygmalion's Eliza Doolittle), a computer program that took on the persona of a psychotherapist – notably similar to the "Psychotherapist" game found on Joseph's computer at Equus Oils); this program had a large influence on the development of text adventure games.

Per the V&A's Videogames: Design/Play/Disrupt exhibition, along with the Weizenbaum inspiration, Joseph is also modeled after real-life psychologist Carl Rogers and the psychiatrist Martin Dysart from the play Equus.