Difference between revisions of "Cate" 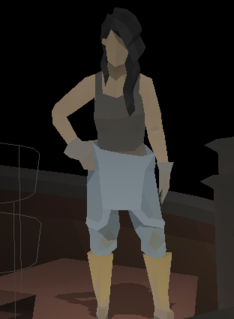 CATE: Mushroom hunting. You can "pick" apples, because they're right out there in the open. Mushrooms hide. You have to hunt for them.

Cate is the captain of the Mucky Mammoth. In Act IV, she joins Conway, Shannon, Ezra, Junebug, and Johnny on their travels down the Echo River in search of Dogwood Drive.

Cate is a tugboat captain who helps operate and pilot the Mucky Mammoth six nights a week. She knows a great deal about mushrooms and their medicinal properties; having become interested in homeopathic medicine after coming across a book on the subject in a used bookstore, she eventually joined the Lexington Mycological Society and began to study the medicinal uses of fungi. She grows many natural plants on board the tugboat, and has an affinity for tea.

She is also a doula, assisting women in childbirth, and helped deliver both of Poppy's nieces.

Per the V&A's Videogames: Design/Play/Disrupt exhibition, Cate was originally based on the Greek goddess Hecate, a figure associated with nature, fertility, and liminal space of crossroads. She was also originally planned to be a relative of Carrington's and based on the mythological psychopomp who would, free of judgement, guide deceased souls to the afterlife.