Difference between revisions of "Lysette" 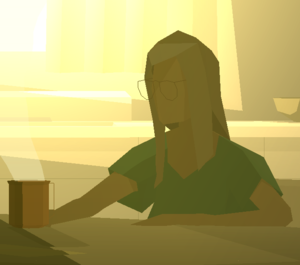 LYSETTE: It wasn't anyone's fault, Conway. That's what we mean when we say it's ...
CONWAY: An accident.

Lysette is an older woman who is the owner of Lysette's Antiques, Conway's employer. She is also his childhood friend, former schoolmate, and Ira's widow. Based on her state in Conway's dream at the beginning of Act III, it seems she is losing her memory, or possibly has aphasia, a language disorder. During the dream, she asks Conway to wait with her until her sister, Cora, arrives to pick her up, after which she would presumably take care of her due to her old age. In Act I, Conway notes that she has immaculate handwriting.

Lysette and Conway met in the fall at school. Neither were good students, and they would cut out early to spend the afternoon in darkened bars they weren't old enough to be in. They eventually drifted apart. After spending years working a long haul job, Conway took a job from Ira; when Ira brought him home to meet the family, he learned that Ira was married to Lysette.

Lysette has a sister, Cora, who lives in Nashville, Tennessee. Her husband (and Conway's former employer), Ira, passed years back, and her son Charlie died in a roofing accident in college.

"Too Late to Love You"[edit]

During Conway's visit to the Lower Depths, it is hinted that Lysette and Conway had a failed romantic history. The song "Too Late To Love You" was likely originally performed by Lysette about Conway.