A note from Jake, Tamas and Ben discussing their recent occupation with work "on Act IV, and secret distractions." They mention a 50% sale of the game on Steam, and that sales like these are often a "potent draw for an audience who may not otherwise give our weird little game a second thought," and that they appreciate fans sharing the link online or with friends, etc.

They also mention that they often get asked about making and selling prints/posters of the game, which they eventually plan to do, but for now are sharing high-resolution artwork which fans can print at home if desired. The following three prints were originally created for the opening exhibition of Chicago's VGA Gallery, with assistance from Aron Gent of Document: 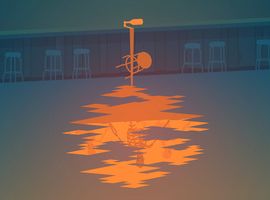