Kentucky Route Zero is a magical realist adventure game about a secret highway in the caves beneath Kentucky, and the mysterious folks who travel it. The game is developed and published by Cardboard Computer, an independent studio consisting of Jake Elliott, Tamas Kemenczy, and Ben Babbitt. It follows an episodic format, mirroring the dramatic structure of a five-act play. The project was first revealed on January 7, 2011 on Kickstarter. By the end of the campaign, the game had acquired USD $8,583 from 205 backers, exceeding its original goal of $6,500. A heavily-revised trailer with an updated visual style was released on October 17, 2012.

The game's five acts follow the narrative of a truck driver named Conway and the mysterious people he meets as he tries to cross the fictional Route Zero to make his final delivery for an antique company. The first act was released on January 7, 2013. The second, third, and fourth acts, along with four shorter, free-to-play supplemental games, have since been released. The final act is forthcoming. The game is currently available via Steam, itch.io, GOG.com, and the Humble Store, and will release on all major consoles in 2018. Players receive all available acts upon purchase, with future acts and updates free-of-charge. 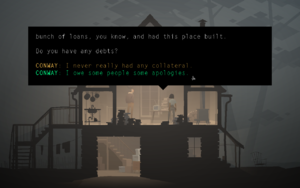 Players are able to choose between two dialogue options.

Kentucky Route Zero is point-and-click game. There are no traditional puzzles or challenges; instead, the game focuses on storytelling and atmosphere. Players are able to control Conway (and other characters) by clicking on the screen, either to guide him to a location or interact with other characters and objects. Players are also able to choose characters' dialogue during in-game conversations, which are text-based. These choices do not impact the storyline as in a branching narrative, but rather influence the poetic dialogue of characters later on, affect aspects of stories that are told to the player, or change which characters may be encountered. 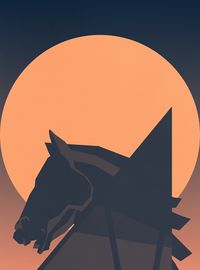 Act I of Kentucky Route Zero was released on January 7, 2013. It introduces Conway and Shannon to the main cast of characters. 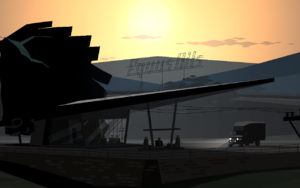 An old hound in a straw hat. Both have seen better days.

Conway, a truck driver, works as a deliveryman for an antique shop owned by a woman named Lysette. Conway's last job before retirement is to make a delivery to 5 Dogwood Drive. The game opens with Conway, together with his dog, pulling into the parking lot of a dimly-lit gas station, Equus Oils. He meets Joseph, the owner, sitting outside in a Queen Anne armchair. Joseph and Conway talk about a nearby truck accident with whiskey bottles broken all over the highway, and gives Conway's dog some jerky, who he optionally names either Blue or Homer.

Conway mentions his delivery to make on Dogwood Drive, to which Joseph says he must take the mysterious Route Zero. Joseph tasks Conway to fix the circuit breaker to restore power to the station so that he may use the computer to locate directions. In the basement of the horse-shaped station, Conway encounters Emily, Ben, and Bob who are playing a tabletop game and inadvertently blocking his path. They ignore him, apparently unable to see or hear him. Overhearing that they've lost a glow-in-the-dark twenty-sided die, Conway manages to find it with the lantern turned off. When he returns, the three players have disappeared. Conway reaches the breaker box, restores the gas station's electricity, and returns outside. When he asks Joseph about the strange people, Joseph suggests Conway may have been hallucinating. Conway uses the computer to find directions to the Márquez Farmhouse, where he is told he can talk to Weaver Márquez who has a better understanding of the roads. He also reads an email from Consolidated Power Co. who has sent Equus Oils a 14-day overdue notice. As Conway leaves, Joseph tells him that he loaded Weaver's old TV into the back of his truck to take to her. 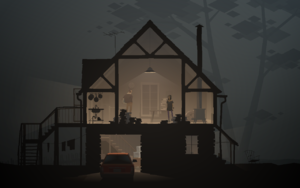 WEAVER: That's my father's brother's daughter, Shannon. We're about the same age. Well, we used to be. She's older now.

Conway drives north on Interstate 65 to the Márquez residence, optionally encountering a variety of hidden locations and characters on the way. One location describes a museum with a book in the entrance. On the book's cover is written a smudged, indecipherable three-word phrase. On the first page of the book is a drawing of a horse; after several dozen blank pages is an elaborate ink drawing of a one-legged man working an antique adding machine, surrounded by whiskey bottles. Exploring further into the museum, Conway finds a marble hallway, its walls lined with plexiglass boxes filled with bird wings. If choosing to push through and shatter two glass doors, he finds another hidden door that leads to a large room filled with CD-ROMs, prints, and punchcards in envelopes labeled with real life artists' and game developers' names, along with titles of their work. One envelope's label contains the text "If I Had My Way, I'd Tear the Building Down. Wheattree, 1985." Conway is able to gather that it is about three characters in a tragic "love polygon": Joseph, Donald, and Lula. 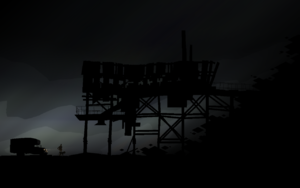 At the farmhouse, Conway meets Weaver, who asks him to set up the TV, after which she can explain how to get to the Zero. Conway sets up the TV; as they look at the image displayed on the screen, Weaver says that Conway has made a mistake in setting it up. She tells Conway that it is time to start paying attention, and to look closely at the television. Looking into the screen again, Conway's gaze drifts to the barn out back and he spaces out.

Weaver informs him that the TV is picking up the wrong signal, but that her cousin Shannon can fix it. Although she would rather have Conway find Shannon and fix her TV, she gives him directions to the Zero on-ramp. When Conway looks away from the screen, Weaver has vanished. As Conway heads back down to his truck, Emily, Ben, and Bob can be seen playing "You've Got to Walk" in the foreground.

Arriving at his destination, Conway finds that the area is an abandoned mineshaft called Elkhorn Mine. Though skeptical that the mine would house an on-ramp, he walks inside. In the entryway, he meets Shannon, who is on the phone with someone about a looming eviction. After she hangs up, Conway explains his predicament. Shannon then reveals that she encountered Weaver earlier that evening, and that Weaver told her to come to the mine to "find something she's been looking for." The two head into the mine, and Shannon has Conway test a P.A. system to measure the depth, width, and air quality of the tunnels before venturing further. During the last test, the reverberation causes the roof of the mine to collapse onto Conway, crushing his leg.

Shannon manages to free him and get him onto an old mine cart, part of the rail system from when the mine was operational. While exploring and looking for an auxiliary exit, Shannon reveals that the mine flooded at one point, killing the many miners trapped inside. The two discover a turntable, allowing them to change tracks and explore a number of tunnels. They explore the mine and see ghostly visions of miners in the flickering sparks thrown off the tram wires. At the end of one mine passage, they come to a stage which Shannon explains was used by folk song archivists as a recording studio for songs the miners would sing. 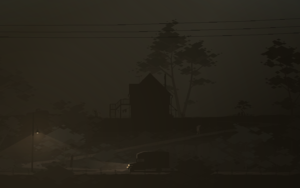 SHANNON: Do you have any debts?
CONWAY: I owe some people some apologies. 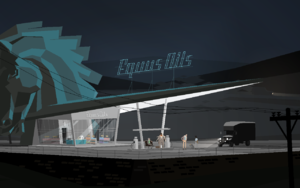 CARRINGTON: If you have attention to spare, I'd be grateful. Somewhere outdoors. Somewhere intimate. Somewhere tragic.

After exploring, they reach the exit. Shannon tells Conway she wants to investigate a tunnel with broken track from before, and has him wait for her. In the dark depths she discovers piles upon piles of helmets of the deceased miners. While waiting, Conway can choose to investigate various objects, such as a birdcage and tape reels, before limping out of the mine and into a wooden shack where he encounters notebooks written by archivists labeled "Márquez." Conway asks if Shannon's parents were the archivists, to which she says that Weaver's parents were; hers were miners who died in the flood.

Conway and Shannon travel to Shannon's workshop, located at the back of a small bait and tackle shop at the corner of Wax and Peonia Road, where Shannon recently saw Weaver's image on TV. However, Weaver is not there. On the way back to the farmhouse, Conway can choose to stop at Equus Oils where he and Shannon meet Carrington, Joseph's friend who is looking for a venue for his play. Carrington describes his play as "a grand, broadly experimental theatrical adaptation of 'The Death Of The Hired Man' by Robert Frost," and asks Conway to keep an eye out for venues for him. 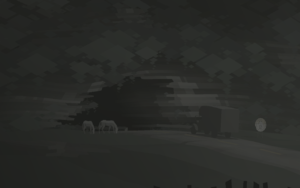 SHANNON: There, just gotta turn it north/south, and —

Back at the Márquez Farmhouse, Shannon reveals that Weaver fled after learning of her family's debts, along with her own due to university tuition, and that tonight was the first time she had seen her since then. As Shannon attempts to fix the old TV, she notices moss growing on the vacuum tubes. After she cleans and recalibrates the TV, Conway looks in again. This time, both the picture on the screen and the barn behind the house begin to warp and separate, forming an image of the opening to the Zero and the truck driving into it. Black. 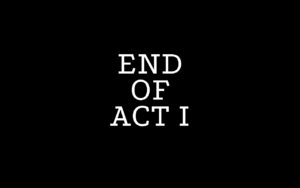